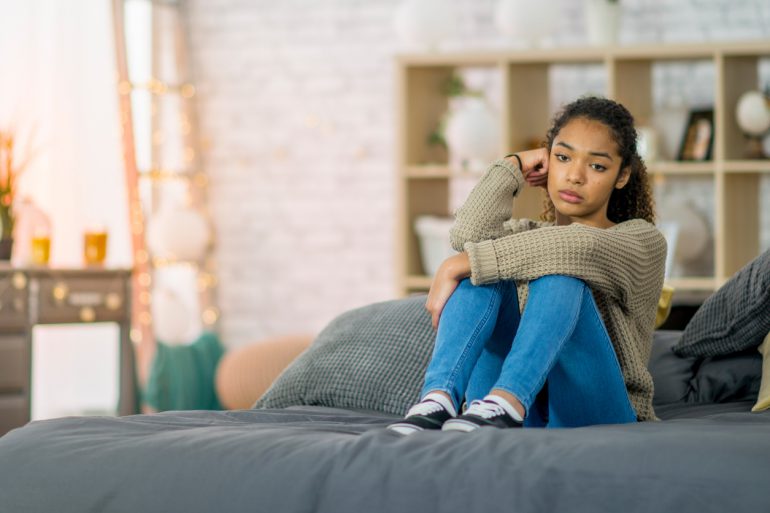 By the time they reach their teen years, girls are more than twice as likely as boys to be diagnosed depression, at a prevalence that’s comparable to adults (fourteen to twenty per cent). It’s known that girls’ emotional recognition matures faster than boys’. This same sensitivity to the feelings of others can also make them more vulnerable to anxiety and depression.

Learning to recognize teen depression can be difficult, since many of the early symptoms—mood swings, withdrawal, smartphone addiction—closely resemble what we traditionally refer to as “being a teenager.” Parents should not, however, dismiss any of these as “just a phase.” Left untreated, depression can lead to serious behavior problems: problems at school, rage, eating disorders, running away, alcohol and drug dependency, high-risk behaviors, and self-harm.

Every teenaged girl has bad days. But if your girl’s bad days start to outnumber her good ones, it’s worth watching closely to see if she exhibits any of the often-subtle signs of depression.

We’re not talking about garden-variety teen boredom here. What you want to see is if she’s lost interest in things that used to make her happy. If you get the sense that your girl’s just “going through the motions” on things that used to be the center of her life, then you may be seeing one of the first visible signs of depression.

Being depressed takes a great deal of energy, particularly if you’re trying not to seem depressed. Withdrawal is the girl’s way of conserving her strength. She may hide in her room, or you may get the sense that she’s “not in the room” even when she’s just a few feet away.

Watch for physical ailments with no clear cause—headaches and stomach aches are common.

Given that teens frequently turn night and day backwards, this is an easy sign to dismiss. However, if you start to notice that your girl still seems tired no matter how much sleep she gets—or, conversely, that she can’t seem to sleep more than a few hours at a time—then you’re not dealing with a typical night owl.

Does your girl blame herself for everything? Does she seem to operate on the belief that nothing’s going to work out, and that nothing she does will ever be good enough? Does she seem to obsess on past failures, injuries, or rejections? Depression doesn’t always manifest as feelings of sadness or anger. More often than not, it expresses itself as hopelessness, a sense of why-bother.

Your girl may suddenly have trouble making simple decisions, she may have difficulty recalling information, or she may be visibly slow to speak and react.

Bursts of sadness, irritability, or rage are more than drama-queen performances. They’re cries for help from a girl whose depression has progressed to a point where she can no longer predict or control her own behavior.

High-risk behaviors are a major warning sign of depression. They are often a form of self-medicating, an attempt to stimulate emotions or chemically balance them out.

Your girl will not want to share these feelings with you. If you get any clue that she’s thinking about suicide or preparing to act on it, then there’s no debating—it’s time to call for help.

It’s important to remember that the signs of depression may not always announce themselves at full volume. Teenagers are very good at hiding things, and girls often face enormous pressure to smile and look happy. Even so, if you keep your eyes open, you will start to see cracks in the facade. When that happens, listen and respond without judgement, as the loving parent you are. And remember that help is here when you need it.